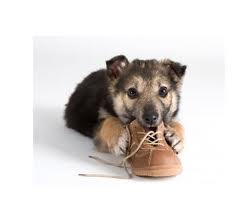 Chewing is a puppy’s instinct.  It is but natural for them to chew on things, although there are times that they do this out of boredom or because they are teething.  As it is natural for puppies to chew, it is now your job as its owner to redirect your dog’s activities to divert it from chewing up carpet, slippers, couch cushions and other things.

Puppies receive contrasting reactions from different people regarding its chewing behavior.  While some people ignore the puppy’s chewing habit, others yell at it to stop it from causing further damage to the thing that it chews.  Yelling at the puppy for chewing things will cause it to be confused because you are interfering with its nature.  This can be a cause for behavior problems in dogs.  The ideal reaction to this is to show to the dog that chewing on your things is not okay, by introducing some alternatives.

How to Stop Puppy Chewing

There are actually a few things you can do to stop your puppy from chewing.  It only follows that it is not wise to scold your dog or hit them for doing so.  Our being angry at it is pointless because it does not have the ability to figure out what it did wrong.  There are a few techniques you can use to reduce the puppy’s urge to chew.

Behavior Adjustment – trying to stop a puppy from chewing is a difficult mission that would probably fail.  Make your job simpler by redirecting the dog’s instinct by teaching it to chew on the right things.  Catching a dog chewing on a slipper does not warrant a yell or a snarl.  Instead of getting angry, replace the slipper with the puppy’s toy.  Once the dog starts to chew on its new toy, reinforce its behavior by praise.

Keep Your Puppy Busy – keep your puppy busy by supplying it with stimulating toys. A bored puppy has a good tendency to chew on things even when they’re not teething.  You can also give them some exercise by playing with them.  This will also keep them from getting bored.

Crate Training – crate train puppies when they chew on things while you’re away, make sure that their access on the house has some limitations.  Putting them in a single room while you’re away is another option.  This will also ensure that the dog’s access is being limited.

Aversion Sprays – spray harmless solutions like Bitter Apple or Cayenne Pepper on your household materials as deterrent for a chewing puppy.  Bad taste will tell the puppy that those things are not worth chewing.

It is perfectly normal for puppies to chew.  But it should not be performed in a destructive way.  It is your responsibility to teach your dog not to chew your valuable items

Be consistent with your rules.  Do not break any of those by allowing your puppy to violate at times.  What is prohibited should not be allowed all the time.  The puppy should be taught its limitations and you must observe and impose it constantly.