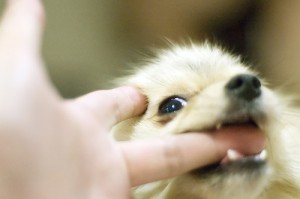 Mother dogs stop puppy biting by experience.  Its littermates and mother teach it the lesson by simply biting it back when it bites.  Normally, puppies should abandon this biting behavior by the time it reaches eight weeks old.

A puppy that is taken home before it reaches  eight weeks old must be trained not to nip or bite.  Be quick to take action if you see that your new puppy manifests this behavior.

Never hit or strike a puppy as a reaction when it bites.  A puppy becomes terrified if it can sense that you are not playing.  This can lead to fear and anxiety that can worsen into aggression issues later as the dog matures.

Stop puppy biting by reinforcing its good behavior by promptly responding to it, while discouraging any negative ones.  Avoid playing games with the puppy that are aggression-related, such as tug of war, wrestling, chasing or any activity that can lead the puppy to nip.  This is one of the best ways not to trigger its aggressive nature.

Again, one of the most important factors to bear in mind when training a puppy is consistency.  Rules should be strictly observed all throughout the entire process when teaching a puppy not to bite or to stop biting.  Applying a double standard or being soft on the rules can only confuse your puppy and it will not learn anything.

An obedience or socialization class is a good place to start when you want to stop puppy biting. Actual bite inhibition classes are conducted in these sessions.  It is in one of these sessions that trainers will show to the puppies that biting is a no-no by imitating a mother dog’s reaction when it is bitten by the puppy.  Socialization training will develop the puppy’s ability to respond to other dogs.  This will help reduce the dog’s aggressive tendencies.

You should stop puppy biting before it blows up into aggression. You can divert its behavior by introducing a constructive activity like a bone to chew or a toy to play with.  Puppies quickly learn to stop biting when you say “NO!” followed by giving it a toy to chew as it attempts to nip on your finger.  This will give it the message that biting fingers is not accepted but chewing a toy is okay.

Another way to stop puppy biting biting is to mimic a dog’s hurt noise whenever it nips at you.  By producing a little yielding noise or whine, the puppy will realize that it has hurt you.  The puppy will respond to it by letting go because it doesn’t actually want to hurt you at all.

Puppy biting  inhibition training is one of the most important trainings that puppies must have while they’re young and they should already stop biting at 10 weeks old.  Remember that biting is an early sign of aggression that must be eliminated while the dogs are young.  You are not actually teaching them tricks, but you’re making them learn ways to make their lives less stressful.