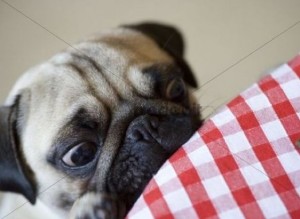 Stop dog stealing food – this is a task that every dog owner should do when they realize that their pet is into this form of undesirable habit of sneakily taking away food from the table or from the hands of unsuspecting little children.

Dogs steal food because they are attracted by its scent.  Unfortunately, dogs are not endowed with conscience; they don’t feel guilty for what they do.  A dog that has received punishment in the past for stealing food will not do it again – at least when someone’s looking, not because it realizes that it is wrong but because it doesn’t want to be punished one more time.  There are a lot of ways to stop or prevent dog stealing food aside from guarding them.

Keep the food out of the dog’s reach.  This is the most practical approach to prevent your dog from meddling with the food that you don’t want to tempt your dog with.

Feed your dog well. Hunger is the biggest motivator for your pet to steal food.  Add to it the temptation factor from the food that smells every time you prepare your meal, and it is almost impossible for it to resist.  A dog’s hunger should be eliminated so that you can successfully remove its urge to steal.

Teach your dog to “leave it.”  Teach your dog the “leave it” command by holding a piece of enticing food in your hand, and as your pet tries to follow your hand or tries to take a smell on the food, say “leave it.”  If it obeys and simply looks at the food, praise it, say “okay” and give the food to your dog as reward, but if it tries to snap the food from your hand, close your fist and say “leave it.”  Open your hand only when it stops minding at the food, say “okay,” then give it the food as reward.  Repeat the process a few more times until the dog realizes that obeying the “leave it” command is the key to the food treat, which is a reward for its good behavior.

Devise some unpleasant consequence for dog stealing food. This can work well in some dogs especially those that are somewhat nervous.  This can be done with the use of an ultrasound generator, a booby trap which you can make by tying a thread to a heap of empty soda can with lots of pennies inside, or any other scenario that will give your pet a scary experience for stealing food.  This method, known as the remote punishment method, should not be applied more than three times.  If it won’t work, try another method.

Do not allow your dog to have access to areas where food is displayed.  You can prevent your dog from stealing food by limiting its access to areas where your foods are stored, or where you take your meals.  You can put it in separate area where temptation is low or absent.  Give it some food to be busy about while you are eating.  Doing this repetitively will even make it volunteer to go to that designated place every time it sees that the family dining table is ready.  Teach your children not to play with the dog while they are holding food in their hand; as even the most behaved of dogs might get tempted with the aromas of these treats that your children are handling.

Dogs are normally attracted to human food and the temptation to either beg or steal it is quite high.  But by applying effective techniques and acting as the alpha dog, you can always teach them to resist temptation and develop acceptable behavior.