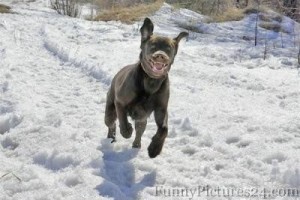 Stop puppy jumping now, and prevent accidents from happening tomorrow when it is big enough to pin anyone down.  Even in the subject of pet training the old adage that an ounce of prevention is better than a pound of cure is also applicable.  A big dog that jumps on anyone has a tendency to knock anyone down.  This situation is more dangerous to small children and the elderly.  Many dog owners simply ignore this behavior until they realize that they can no longer take their dog’s size, weight and strength when it jumps.  You should stop puppy jumping in its first stages because it will become a problem when it grows up.

Every puppy should be taught not to jump (in this context), and the best time to teach them is while they’re young and small enough before they can knock people down when they grow up.

Small Dogs Are Not Off the Hook

You should also stop your puppy from jumping even if it’s a small dog.  Small dogs are not exempted from being averted from jumping.  Despite their miniature size, they can still become a nuisance when their behavior causes some legs to get scratched or little children to get knocked down.

You should teach your dog to behave instead of allowing it to jump as a way of greeting you or other people.  To stop your puppy from jumping, you must first teach it to perform the “sit” command.  This is the way to that your dog should behave when someone arrives, including you.  Once it learns this trick, you can already proceed to other instructions to teach it not to jump.

The training to stop puppy jumping needs pre-planned  sessions.  You will need the help of somebody to act as your company in the house.  To start with, you need to put a leash on your puppy before you allow your company to get in.  Your guest should be told to ignore the puppy until it sits in front of him.

As your company enters, tell your puppy to “sit,” but if it doesn’t obey and attempts to jump on your guest instead, suppress it with the leash and ask your guest to move away from it.  Tell your guest to avoid touching of petting the puppy until it obeys and controls its urge to jump.

You can stop puppy jumping on you by holding its collar and telling it “off” when it jumps when it does the action.  Tell your puppy to sit and hold it at this position while you praise it for obeying.

Encourage everyone in the house follow your example consistently in order for the puppy to understand that everybody doesn’t want it to jump.  Consistency is really an important factor in training a puppy to stop jumping; after weeks of constant repetition, you should be able to stop puppy  jumping.