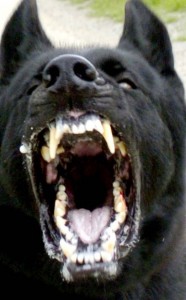 A dog that bites is dangerous not only to strangers but to your family as well.  If your dog bites, that dangerous aggressive behavior must be acted upon immediately to arrest the problem.

How to Stop Dogs from Biting as Puppies

At the dog’s early stage of its life, this behavior can already be detected.  Once biting is pinpointed in a puppy, at six weeks old, it must be subjected to training.  Young pups are easy to retrain because they are still in the developmental stage of their lives.  The puppy is supposed to taught by its mother not to bite until it is eight weeks old.  But if its biting behavior persists after this period, it becomes the owner’s responsibility  to retain  the puppy.

Many people think that biting is just a puppy’s game.  This is a misconception because in reality, the puppy is really biting to assert its position in the pack using its teeth to impose dominance.  Teaching your dog to stop biting should start at puppyhood.

Dog lovers and trainers apply varying ways to stop a puppy’s biting instinct.  The most common approach is by imitating the way the puppy is treated by its littermates and mother.  Giving a puppy a light nip on the neck, producing a whining sound when it bites you or by replacing your hand with another object when a puppy bites are among the good ways to show puppies that biting is a no-no.  If the behavior persists, you should consider an obedience school or better hire a trainer.

How to Stop Dogs from Biting at One Year

When you tolerate a biting or nipping puppy and allow it to show dominance, it will continue with its biting play even at one year of age.  If your dog manifests this kind of behavior, you should immediately stop playing physical or any dominance-related games with your dog.

Limit your dog’s coverage in the house, it must be taught to observe boundaries and limitations.  If crate training is warranted, then do it, or submit your dog to a good obedience training in order to alter its behavior.

How to Stop Dogs from Biting as they Age

Persistent biting behavior in dogs will surely worsen as they mature into adulthood.  This behavior makes the dog prone to bite its owner to assert its dominance as the leader of the pack.  You should not allow this to happen if you want to maintain a good relationship with your dog.  You should always be the dog’ alpha leader.

A biting dog that is more than one year old should be referred to a professional.   A mature dog that bites is dangerous as it might come to a point of opting to impose its dominance with an attack.  You should arrest this problem before your your dog puts you in a difficult situation.

It is important to note that dogs that bite as adults had aggression or threat issues that could have been resolved when they were yet puppies.  You should learn to detect biting behavior in puppies to stop them from continuing it as they mature in order to prevent potential problem before it gets worse.  Remember, biting is the worst thing that your dog can do to anyone.