Dog Aggression Towards People – Prevention is Better Than Cure 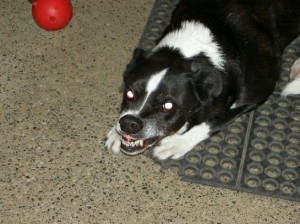 Dog aggression towards people is the most spiteful of all dog behaviors.  It poses danger not only to strangers but even to people close to the dog.  It should be stopped immediately once it is detected and before your dog inflicts any harm on anyone.

Aggression is a product of anxiety and fear. A dog finds something unusual around it – be it a person, other animals or even other dogs, as threatening.  While heredity is a big factor that affects a dog’s ability to adopt to new things, but you must take into consideration that it does not comprise the entirety of the picture depicting dog behavior formation.

One angle that could become a possible source of dog aggression towards people is its lack of socialization.  It is very important for puppies below 14 weeks old to be exposed to the real world where people, animals, objects and even sounds abound.  Getting a puppy used to different types of situations will help it to adapt to those things and simply ignore them when he matures.  Dogs which are not made to adopt to different types of situations are more prone to become anxious and aggressive.

Dog-abuse is also another cause for dog aggression towards people.  A dog that is mistreated by humans, most probably its masters,  treats everyone with distrust, and punishing it will only aggravate the problem as it makes the dog more anxious and stressed.

A dog that manifests aggressiveness to humans needs to be dealt with by a professional, such as an experienced dog behaviorist.  You need to find ways to eliminate the problem as it can be the cause of trouble between you and your friends or relatives.

One method used in treating dog aggression towards people is called desensitization.  It involves finding out the details of the factors that prompts your dog to act aggressively.  Experts pair these aggression triggers with positive reinforcements so that the dog can associate these  with a pleasant occurrences.  This is a slow process, but with consistency, patience and practical knowledge, this is not at all an impossible mission.  You can consult a behaviorist before you actually start a regimen.

While you are still teaching your dog to stop being aggressive, you have to avoid taking him to situations beyond its comfort zone.   You don’t have to push your dog to things that can only trigger its aggressiveness, like suddenly exposing your dog to children if it is uncomfortable with little kids, or some other situations that your dog will get anxious with.  There’s proper time for those and those have to be done slowly.

Prevention is Still Better than Cure

There is no science that guarantees to eliminate dog aggression towards people, but some measures are formulated to effectively reduce its chances of emerging:

— Socialize your puppy by the time it reaches 12 to 14 weeks old;

— Get it used to human touch since puppyhood;

— Respect your dog. Treat it kindly and reinforce its positive behavior with praise;

— Dogs neutered or spayed at an early age are less likely to become  aggressive;

It’s a fact that genetics play a big role in a dog’s aggressive behavior, but some of its characteristics could be environmentally acquired, such as dog aggressiveness towards people.  Early socialization of your dog can prevent this problem, but if your dog is manifesting signs of aggressiveness as a grown-up, you need to contact a behaviorist as early as you can.