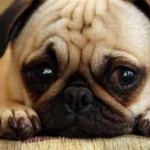 You can stop dog whining through training. But why do dogs whine? This is the first thing you need to know and accept. Whining is one of the few ways a dog communicates. Dogs can’t talk, so they can’t explicitly tell you what they want. They’re like babies in that sense. If they need, feel or want something, they’ll try to tell you about it by whining, growling or barking.

Whining usually starts when your dog is still an adorable pup. While they are really cute and hard to resist, do not tolerate their whining. This is the first step you need to take to stop dog whining.  That being said, a grown up dog who whines a lot already has this habit ingrained in him. You can stop dog whining with firm and consistent training.

Training older dogs will require much time and patience. To make sure that your corrective actions will be effective, you need to be consistent and fair with how you treat his whining. A whistle can help or you can simple say a firm “NO” to help stop dog whining. This will help them realize that whining is a bad behavior that you will not tolerate, thus reducing its frequency.

A dog is used to being a part of a pack or a family. You will know that your dog is whining because he feels lonely if he starts to whine when you’re about to step out of the door, when you’re not playing with him, or when you leave him in the crate.

To stop dog whining, you can start by helping your dog get comfortable in the place where you will leave him while you’re gone or busy. Give him toys and place his food near his crate. This way, he can associate his own area with happy emotions. Additionally, you can also put an item with your scent in his crate. This will make him feel that you’re always with him.

Try this short exercise to help your dog be comfortable in being alone:

1. Give him toys and play with him at the area where you will leave him most of the time.

2. Leave him alone after a few minutes. Your dog will probably start to whine a few minutes after you’ve left him.

3. Resist the urge to come and “rescue” him. Go back to him a few minutes after he has stopped whining. This is very important, do not go back to him while he is whining. Doing this will make him think that he can control you.

4. Repeat the exercise but extend the “waiting” time before you go back to him.

5. Praise your dog gently when he’s able to stop himself from whining in longer time spans. You can also encourage this good behavior by giving him a treat a few minutes after he has stopped whining.

Storms, Fireworks and Other Nasty Things

As all dog owners know, dogs get scared because of fireworks, storms (thunder to be specific) and other loud noises. In this situation, the only thing you need to do is to comfort him. If you can, do not comfort him at the exact time that he is whining, he will only associate it with getting attention. Wait for him to stop and then start comforting him.

Do not overreact or overdo things though, comfort him then move on. Speak to him and gently assure him that he won’t be harmed by the noise.

Pain and other ailments

This is rarely the case, but if it is, then you should immediately help your dog. A dog who doesn’t usually whine but suddenly starts to is definitely hurt. As a general rule, if your dog whines at odd places and times, he is most likely in pain.

Pat him gently in different areas. Give his legs a gentle squeeze and observe if he whines louder when you touch them. Also check if he’s having a difficulty in moving or when a part of him is bleeding. If he’s still whining and you just can’t figure out what’s wrong, have him checked by a vet.