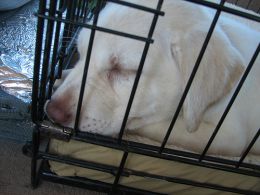 Millions of people across America have learned to use the crate as a means to reduce anxiety, barking and destructive behavior in dogs.  Crate Training is an effective approach in house-breaking a new puppy.  It can also help in making the puppy adapt to the idea that it has its own place, even if it insists on sleeping on the couch or even worse, your bed.

The Value of a Crate to a Dog

A majority of dogs love their crates; that’s a fact.  Even wild dogs seek sanctuary in small burrows to keep them feeling safe and warm.  A crate does just that in a special way dogs will come to love, because by and by, your dog will come to claim that little space as its sole domain and home.  In most cases, dogs that live in open spaces often grow uneasy in guarding its “territory.”

How to Crate Train a Dog

It is ideal for a dog to be crate trained at a young age.  An adult dog that has never experienced living in a small space will only get anxious when placed inside a little crate.  It is but natural for all dogs to be upset once they are made to stay in space that’s new to them, especially those puppies that have just been deprived of their space in your bed.  But puppies can adapt much faster and in time it will learn to love the crate and call the crate its home.

A family room where there are lots of people during the day is a good place for a puppy’s crate to be.  You can take the crate to your room at night to make it feel your presence.  Remember that dogs are social animals and puppies especially want reassurance that they are protected.  After sometime, it no longer bothers them to be left alone in one place but at this stage, you should keep them safe and calm.

A pet owner who can give his puppies good crate training is sure to produce well behaved dogs.  He is also sure to keep his puppies relaxed to avoid sharing their anxiety with everyone in the house.